This article presents the Distributome computational and graphical infrastructure and illustrated its functionality for discovery, exploration and application of diverse spectra of probability distributions. The Distributome platform provides human and machine interfaces for traversal, search, and navigation of all common probability distributions. It also enables distribution modeling, applications, investigation of inter-distribution relations, as well as their analytical representations and computational utilization. 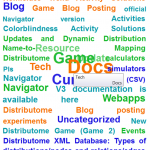 We released a new Word-Cloud engine for search, discovery and traversal of hte main Distributome Web-Resources. See the bottom of the Distributome Homepage.

Distributome Game 3 (Monty Hall/3-shell style) was just released on the Distributome website. The objective of this game is to score the most amount of points by choosing the card (density graph) that matches the given distribution plot.

This game is a variation of the 3-card Monty Hall game, also known as the 3 card game or 3 shell game. The game begins when the start button is pressed. Afterwards, all cards on the field are flipped face up for a brief interval in order to reveal each card’s density curve. Next, all cards are once again flipped face down, and around on the board. Once the cards have finished being shuffled, the prompt square will either ask for a certain distribution by name or by its corresponding histogram, depending on the mode that is currently selected. Once a card has been selected, the appropriate amount of points will be added to the player’s score, and the next round will begin. Game ends when when the pre-selected number of rounds have passed. Players receive 1 point per each correct answer. No points are deducted for incorrect answers. 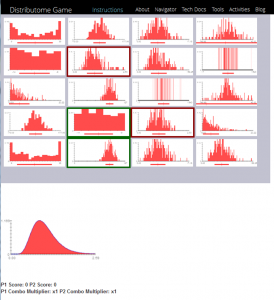 A new Distributome Game (Game 2) is designed, implemented and serviced as a webapp on the Distributome website.
The objective of this game is to score the most amount of points by matching the given density curve with its corresponding histograms. The Game Board shows all of the possible histograms that can be matched to a given density curve. The game begins when the current density graph is revealed. At this point, the player has to find the correct histograms within the time limit. Once the time limit is reached, the corresponding histograms are flipped face down, and the next round begins with a different starting density graph.

Updates/Expansions to the set of Problems/Processes would be easy (expand in this CSV format):
Game meta-data SVN
Distributome Game 2 Webapp
Current Meta-Data (CSV) 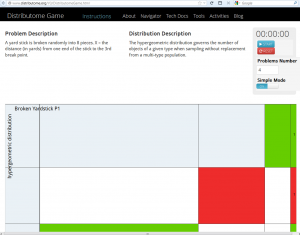 Updates/Expansions to the set of Problems/Processes would be easy (expand in this CSV format):

We developed a new JQuery-based Distributome Carousel that allows dynamic exploration of the different types of Distributome web resources.

The goal of the Distributome Game is to correctly identify the correspondences between pairs of processes (represented as problems) and probability distributions (as models).

The Distributome Game is available at:

Updates/Expansions to the set of Problems/Processes would be easy (expand in this CSV format):

This is an update on the recent developments of the Probability Distributome project:

(1) We have V.3 of the Navigator available online

(2) All these changes are pushed to:

The following types of Distributions (nodes) and relations (edges) are currently allowed. These may later be modified or expanded. These types are referred to in the Distributome.xml Database (see the HTML rendering of the XML).

Node (distribution) Types will be (full-Name and abbreviation)

Below is the status of the Probability Distributome Navigator which describes the new textbook based ontological classification of distributions, using a preference XML file, and the  current status of the integration of the Navigator and different Distributome tools (calculators, experiments, and simulators), also see the technical documentation.