In March 2012, we expanded the collection of Distributome calculators, simulators and experiments.

In addition we introduced a new mechanism to infer the unique URLs (HTML wrappers) for the Distributome Tools (calculators, simulators and experiments). When users navigate the Distributome universe, the second panel on the right side contains dynamic links to Sim, Calc and Exp that are specific for the user-selected distribution. These links need to be dynamically generated using the name of the Distribution. In distributome.js, this dynamic linking is accomplished via:

We are looking for the best (most-efficient, most-reliable, most-scalable, most-extensible) solution to this mapping issue.

We expanded the Distributome experiments (13), simulators (19), and calculators (19). We are continuing to expand all collections of web-apps, enhance their functionality, integrate with other Distributome resources (e.g., activities) and improve the user experiences.

In 1898, the Polish statistician and economist Ladislaus von Bortkiewicz published his famous book “Das Gesetz der kleinen Zahlen” (translation: The Law of Small Numbers).  The book contained his analysis of some fascinating data sets on the occurrence of rare events in large populations.  In one case Bortkiewicz analyzed the number of soldiers in each corps of the Prussian cavalry who were killed by being kicked by horses between the years 1875 and 1894.  There were fourteen different corps examined and the data are available below.  Ten of the fourteen corps had twenty squadrons with soldiers in similar positions while the other four had features indicating substantive differences in their populations.  Thus, Bortkiewicz argued that these four corps might be excluded from analyses of the data.  He writes (as translated by C.P. Winsor, 1947: Human Biology 19:154-161):

The Guard Corps contains, apart from artillery, engineers and trainees, 134 infantry companies and 40 cavalry squadrons; the XI corps has three divisions; the I corps has 30 and the VI corps has 25 squadrons, against a norm of 20 squadrons.

Problem 1:    Explain why the number of soldiers in any one of the fourteen Prussian cavalry corps killed by horse kicks might be reasonably modeled by a Poisson distribution.

Problem 2:   Consider the total number of soldiers killed by horse kicks in the fourteen corps put together (even including the four identified by Bortkiewicz as being different).  What distribution would provide a good model for those data?

Problem 3:   Let’s compare the number of soldiers killed by horse kicks in the data to what would be expected under the Poisson probability model.

Data Description
These data indicate the number of deaths by horse-kicks in the Prussian Army from 1875 to 1894 for 14 army corps. The data are derived from Andrews and Herzberg’s book(1985, p. 18). Originally published in the 1898 book “The Law of Small Numbers” by the Polish statistician and economist Ladislaus von Bortkiewicz. Ten of the corps have a similar structure of 20 squadrons each and performed similar duties.  The Guard Corps, Corps I, Corps VI, and Corps XI have different structures and performed somewhat different tasks then the others.

Distributome Activity on Sample Sizes and the Accuracy of Polls 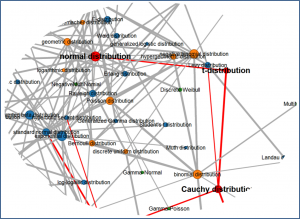 Surveys about public opinions on controversial social issues are becoming increasingly frequent as topics such as the legalization of marijuana, abortion policy, marriage rights for homosexuals, and immigration policy are hotly debated in the media.

This activity illustrates the inter-distribution relationships between Cauchy, Student’s T and Standard Normal (Gaussian) distributions.  These relationships are used to provide a better understanding of how strongly sample sizes are related to the accuracy of polls.

In this activity you may assume that both of these pollsters use similar techniques that involve telephone interviews and weighting the answers given by individuals to align the respondents demographics with population values and finally averaging to produce unbiased and essentially normally distributed estimates. Below are 4 related, but complementary, problems regarding this study.

Note: The problems below may be appropriate for an undergraduate course in probability. The last part (Problem 4) would be more appropriate for masters level course (and should have a General Cauchy distribution tag and a tag for its relationship to the bivariate normal).

Specific Problems and their Solutions

The Pew poll had almost twice the sample size of the Opinion Research Corporation poll. What is the chance that it was more accurate than that poll for estimating p = the percentage of American adults that favored the legalization of marijuana in spring, 2011? Be sure to clearly define how you are interpreting “more accurate.” Also state and justify any assumptions you make in solving for this probability.

See a Hint
Decide on the measure of the accuracy of a poll and then evaluate \(P[\frac{Accuracy_{poll1} }{Accuracy_{poll2} } < 1]\) to gauge the chance that one poll s more accurate than the other.

See a Solution: Step 3
Since the two polls use a similar methodology we may assume that the technique produces estimates with variance \(\frac{\sigma^2}{n}\) when a sample size of \(n\) is used (for \(n\) large enough for the normal approximation to be valid as in these cases).

See a Solution: Step 4
Thus, \(\frac{\sigma_1^2}{\sigma_1^2}\equiv \frac{824}{1504}\equiv 0.548\). Finally, we should assume that the estimates from the two polls are stochastically independent, which is reasonable here since they were conducted by two separate companies and the population of U.S. adults is much larger than either sample size.

See a Solution to First Problem: Alternative 2
A second, more cumbersome, alternative is to work directly to find the marginal distribution of \(\frac{X}{Y}\) from the bivariate normal – see the solution to the last part below with \(\rho\equiv 0\).

Describe how you would combine the data from these two polls to form a single estimate of \(p\).

Problem 3: Are these probability estimates correlated?

What is the correlation between your estimate above and the individual estimate produced by the Pew poll?

What is the probability that your combined estimate (from the second problem) is more accurate than the estimate based only on the Pew poll?

To derive the generalized Cauchy distribution CDF directly, we start with the bivariate normal distribution of ”X” and ”Y”:

Increasing the sample size may help significantly in certain situations – but not as much as intuition often suggests. 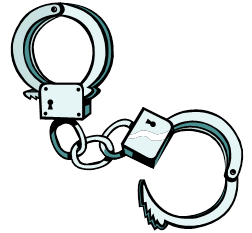 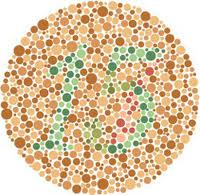 In practice, it may difficult to obtain reliable parameter estimates when the event at hand is very rare (such as with colorblindness in women). The use of a valid probability model such as the relationship between the chance of colorblindness in men and the chance in women may improve these estimates.

For hidden fields you need to use the following alternatives as analogues of commonly used TeX/LaTeX syntax (as the JavaScript code behind the MathJax and the Hidden-answers plug-ins are incompatible):

We introduced a new Distributome.xml.pref file, which allows customization of the look-and-feel of the Distributome Navigator and Editor.

One example of this customization is the ability to display hierarchically the Ontology of the collection of distributions contain in the Distributome XML DB. That is we have a mechanism to render the nodes and edges as 3 levels: Top, Middle or All/Complete levels (affording to the pref file). The figure below illustrates this new hierarchical Distributome Navigator display. 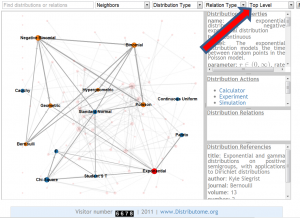 There is a new Distributome DB/Meta-data HTML validator which renders the entire database, including references and citation URL links into a dynamic HTML webpage.

There are many examples of resources for retrieving BibTeX publication references (bibliographic citations):

Below are examples of the second generation (V2) of the Distributome XML meta-data – this version decouples the meta information about distirbutions (nodes) and their relation (edges) from the reference citation management (using BibTeX):
Both the XML and the BibTeX files still need to be expanded, but they illustrate the integration (mapping) between distributions(nodes)/relations(edges) and the corresponding bibliographical references (citations) using the unique Digital Object Identifiers (DOI) or URL addresses, specific to each publication/citation. See